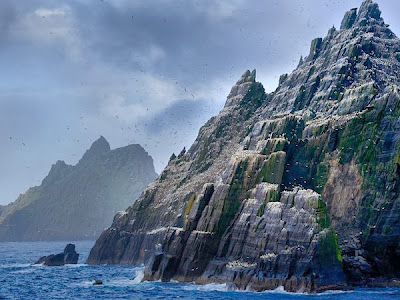 Contributing editor Jim Richardson is a photojournalist recognized for his explorations of small-town life. His photos appear frequently in National Geographicmagazine.
"If you want to be a better photographer, stand in front of better stuff."
That's a simple mantra and I repeat it like some mystical incantation rooted in utter practicality. I share it with other photographers and I endeavor to follow my own advice. As a result, I spend a great deal of time doing photo research, looking for great locations to shoot. Put simply, I'm a better photographer when I'm standing in front of something wonderful like the Grand Canyon.
Getting to wonderful places is bread-and-butter photography. Getting there is only half of any great photograph's story. The other half is how the photographer prepared to envision the subject once in front of it.
Example: Today my mind is absorbed in the long climb up Skellig Michael, that remote crag isolated in the Atlantic off the coast of Ireland. There, Celtic monks found their solace in spiritual isolation 1,400 years ago. I have never been on Skellig Michael, though I have come close four times. Each time I was thwarted by high seas. Mentally I am preparing to be among the beehive huts in the monastery at the summit, in the mindset of ascetic hermits seeking their spiritual desert in the vast Atlantic.
In four days I'll board the National Geographic Explorer for a cruise of the British and Irish Isles, and I'll have a chance once again to ascend the slopes of Skellig Michael. I want to be ready to seize the day.
For me, this groundwork is part of photography, as essential as knowing exposure and lighting or recognizing the decisive moment. Research sounds like drudgery to many photographers, but for others digging into a subject in advance is part of the pleasure—its own reward. I'm one of those photographers.
Philosophically, photographers seem to divide along that fault line. On one side are those who desire only to be in the moment. For them, forethought only distorts perception. On the other side are the planners. These folks would never dream of going out the door without a full shoot list, or even a script. (Actually there is a third group nowadays. They just capture scenes wholesale and do all the creative work in Photoshop after the fact.)
Fortunately it doesn't have to be an either/or decision. Most National Geographicphotographers I know do both: research extensively to prepare their schedule (and their minds) and then become existentially in-the-moment once on site.
Here are a few things I do to get ready for a photographic trip: