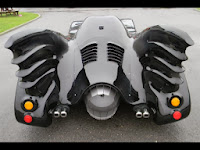 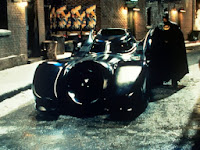 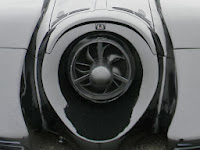 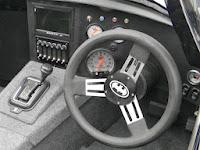 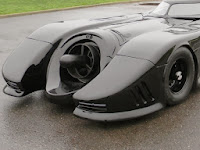 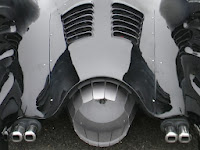 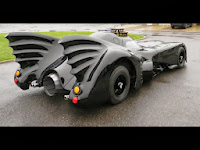 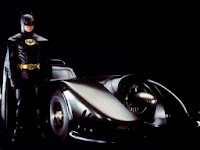 Holy authentic replica, Batman. This Batmobile looks just like the real thing! It's just one of a number of cars going under the hammer at the forthcoming Historics at Brooklands auction at Mercedes-Benz World, Weybridge in the UK.

The Batmobile replica is road-legal, so it's free to cruise around the streets of Gotham City, Grimsby or Gravesend, with any would-be Batman at the wheel.

Although we do wonder where the number plates should live. Probably not something that concerned Batman. Or if it did, he would have simply let Robin deal with it.

The Batmobile replica is said to be able to achieve the 0-60mph (0-100kph) time in just five seconds, although with visibility resembling that of a jet fighter, you'd need Batman-levels of bravery to do that.

The Batmobile replica features a fully operational flame-thrower at the rear and a smoke release mechanism. Pretty cool optional extras for a road-legal Batmobile.

It also features hydraulic suspension, enabling the car to be lifted a full nine inches off the ground. Real superhero gadget stuff.

But that's nothing compared to the real thing, which featured two spherical bombs and a pair of Browning machine guns.

Earlier this year, the original 1969 Batmobile sold for £2.9 million at auction.

It was based on a 1955 Lincoln Futura concept car, which itself was a one-off that cost the equivalent of $2 million to build.

The team at Historics at Brooklands say the Batmobile replica is: 'Undoubtedly one of the most striking vehicles on the planet, this would be the ultimate purchase for any private collector - and don't forget, chicks love the car.'

Seriously. That’s what they said.

Riddle me this - is that a fair estimate for a Batmobile replica? Holy price tag, Batman, we'll find out later this month.
Email ThisBlogThis!Share to TwitterShare to FacebookShare to Pinterest